XP share in enterprise – the song remains the same

The IT world remains focused on the upcoming end-of-support of Windows XP in April 2014. Much ink has been spilled on the status of XP migrations and the ramifications of still using XP (and old versions of IE) in your enterprise after next April. We’ve discussed both on this blog, and will continue to do so, as this is a critical topic for our customers and partners.

When we last checked the data in early August, Windows XP’s share drop had flat lined and there was general cause for concern that too many enterprises would not hit the April date. Since then, two things have happened:

Looking at the Nov 1st data from Net Applications, we can see the step-function drop in Windows XP with the August methodology change. We can also see a return of the flat-line trend, renewing fears of a coming security and business crisis in April 2014. Or, in the words and music of Led Zeppelin, “The Song Remains the Same“.

In addition to looking at operating system share, we can also check in on browser share as of Nov 1st. No surprise on overall browser usage, as Internet Explorer maintains the commanding lead it established during the last millennium.  For many years Internet Explorer share was headed downward, but it’s stabilized in the mid-50% range in recent years. In the enterprise, Internet Explorer remains even more dominant, though specific data on usage share is hard to find, and even harder to validate. Drilling down further, we can see how the various versions of each browser are faring. Chrome and Firefox users tend to update immediately (and automatically), so the most recent version is typically all we’ll see among the top 7 browser versions. But the Internet Explorer universe is much more diverse due to compatibility changes from version to version. If you have an application that only works in a particular version, you’re stuck using that version – until, of course, you deploy Browsium Ion to enable legacy web apps to run in modern versions of Internet Explorer. 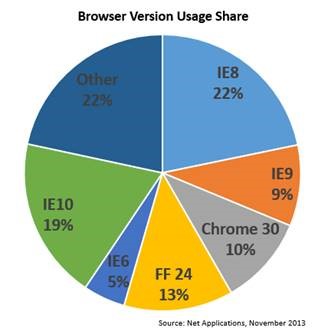 Most notable in the above chart is the usage share of IE8. Microsoft’s venerable 4 year old browser holds the top spot among all browser versions. It’s hard to imagine many consumers using IE8 today, as Windows Update is going to upgrade them to IE10 the first chance it gets. And the 9% of all PCs running Windows 8, from the first chart above, are all running IE10 or IE11 (as of Windows 8.1). So one can only conclude that the lions share IE8 usage is occurring in the enterprise. This is a major new trend that we’ve blogged about in the past – and represents the next browser migration challenge for enterprise. We’ll be talking more about the IE8 migration challenge, and how Browsium Ion solves it, in upcoming posts. In the meantime, check out our IE8-IE10 remediation demo.